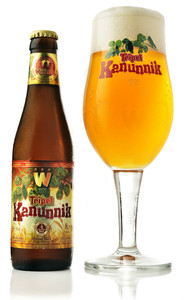 De Kanunnik is a genuine Tripel and as such, goes a step further in alcohol content in comparison with Wilderen Goud. This pleasant and fruity tripel has a full mouth feel and distinguishes itself through its malty aroma.

This four-grain triple is brewed using barley, wheat, oats and rye as well as three herbs and two types of fine hops, including an American aromatic hop. It is based on an original Wilderen “kanunnik” (canon’s) recipe.

The Wilderen Goud and the Kanunnik Tripel contain the same type of yeast, hence its fruity character. “Mild, slightly hopped and herbal”, is the verdict of brewer Mike.

This beer is also used in the distillation of Wilderen’s “Eau-de-Bière”. This is a proper “Eau-de-vie” of superior quality with a 32% ABV alcohol content. A perfect combination of distilling and brewing.

Compared with the glass used for Wilderen Goud, this is of a more classic design and a genuine tripel glass. Very elegant with fine contours, eminently suitable to the beer for which it was designed. The glass also contains two hidden messages.

Mild but herbal tripel, not a very pronounced after taste. The taste is reminiscent of citrus fruits with subtle touches of vanilla, banana, peach and wood with malts and candy sugar.

Coriander is prominent amongst the herbs.

This is a very versatile beer for culinary use or food pairing. Can be enjoyed with fish or meat dishes or added as an ingredient to certain recipes. It would benefit from a robust food pairing to bring out the taste.

We are suggesting a combination with the acidic taste of vinaigrette or mustard, for example.

This beer, like most other triples, will evolve in taste. The longer the beer is stored, the more its taste changes.

After a while it will decrease in fruitiness and the taste of hops will diminish. This beer is brewed to be consumed at a young age.

As with all of Mike’s brews it’s available throughout the whole year at the brewery (tap & bottle) as well as via resellers or at some supermarkets.

It is also available at some of the better specialized bars and cafés and of course (online) beer shops.

Wilderen Goud
Wilderen Goud is a pure malt beer, quite fruity with an enjoyably dry aftertaste. Wilderen Goud was launched in July 2011 and is a robust everyday drinking beer, perfect after a walk or cycle ride or to take with you on a trip. ...