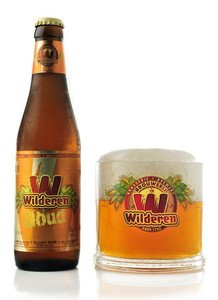 Wilderen Goud is a pure malt beer, quite fruity with an enjoyably dry aftertaste. Wilderen Goud was launched in July 2011 and is a robust everyday drinking beer, perfect after a walk or cycle ride or to take with you on a trip.

Little wonder that this beer is a hit in student cafés. “This is a beer everyone likes and easily accessible”, is brewer Mike’s opinion.

“Not complex or extreme but very tasty.” It makes a perfect alternative to the lighter, blonde abbey beers and it is an excellent thirst quencher with a rounded taste.

Top-fermentation. re-fermented in the bottle.

The rather eccentric serving glass was designed by the brewery itself and is unmatched by anything else on the beer glass market. The design of this unusual ‘jam jar’ is now iconic. You can purchase it from the brewery and in other outlets.

In the kitchen this beer will make a perfect combination with ingredients that reinforce the taste of the beer and are noticeable as aromas within the beer.

We suggest a combination with pork, fruit (peaches) and strong spices such as curry, sage, chilli...

This is a beer without airs and graces. It is best consumed as young as possible. In view of the beer’s alcohol content and it general character, there is no point in storing it for years.

There will not be a further evolution in taste to enhance this brew.

As one of the main brews which Wilderen produces it is available throughout the entire year at the brewery as well as via resellers and some supermarkets.

Wilderen Goud is (as are Wilderen Kriek and Tripel Kanunnik) steadily gaining fans not only on a domestic level but also outside of Belgium.

It is also available at some of the better specialized bars and cafés and of course (online) beer shops.

Tripel Kanunnik
De Kanunnik is a genuine Tripel and as such, goes a step further in alcohol content in comparison with Wilderen Goud. This pleasant and fruity tripel has a full mouth feel and distinguishes itself through its malty aroma. This fo ...