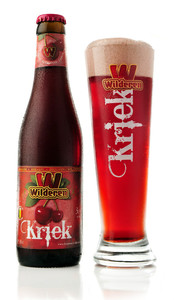 The old brewery tower with open cooling basin is used in the lambiek’s spontaneous fermentation. In the foederzaal, where the wooden barrels are stored, the lambiek will ferment for at least one and a half years in vertically placed barrels.

Wilderen Kriek is the lightest sibling of the Wilderen beer family, which makes it the perfect summery thirst-quencher. Like the Wilderen Goud and Tripel Kanunnik, this is a product of artisanal quality which demonstrates its craftsmanship and has no need to resort to extremes.

The use of lambiek matured in oak barrels leads to spontaneous fermentation. The beer will undergo a second fermentation in the bottle.

Wilderen Kriek is obtained by soaking 100% old lambic in fresh krieken (sweet cherries) and their juices, followed by in-bottle fermentation.

In common with all beers from Brouwerij Wilderen this beer has had a glass especially designed for it. All glasses can be purchased from the brewery. An original, artisanal Kriek such as this one from Wilderen deserves to be served in its own glass.

Sweet at first, with a slightly sour after taste. Moderate carbonisation with a creamy and very pink collar. You cannot fail to notice the use of a high proportion of sweet cherries.

In view of its sweet and sour character, Wilderen Kriek is eminently suitable as a degustation beer to accompany a range of desserts, but can also be used in the preparation of, for example, a sabayon (zabaglione) with fresh summer fruits.

Wilderen Kriek is a low-alcohol beer, which should be consumed young. Definitely does not improve with storage.

Wilderen Kriek is available throughout the whole year at the brewery as well as via resellers or at some supermarkets.

It is also available at some of the better specialised bars and cafés and of course (online) beer shops.

Wilderen Goud
Wilderen Goud is a pure malt beer, quite fruity with an enjoyably dry aftertaste. Wilderen Goud was launched in July 2011 and is a robust everyday drinking beer, perfect after a walk or cycle ride or to take with you on a trip. ...

Tripel Kanunnik
De Kanunnik is a genuine Tripel and as such, goes a step further in alcohol content in comparison with Wilderen Goud. This pleasant and fruity tripel has a full mouth feel and distinguishes itself through its malty aroma. This ...
Facebook
Twitter
Google
Email
Pinterest
GET LATEST BEER NEWS