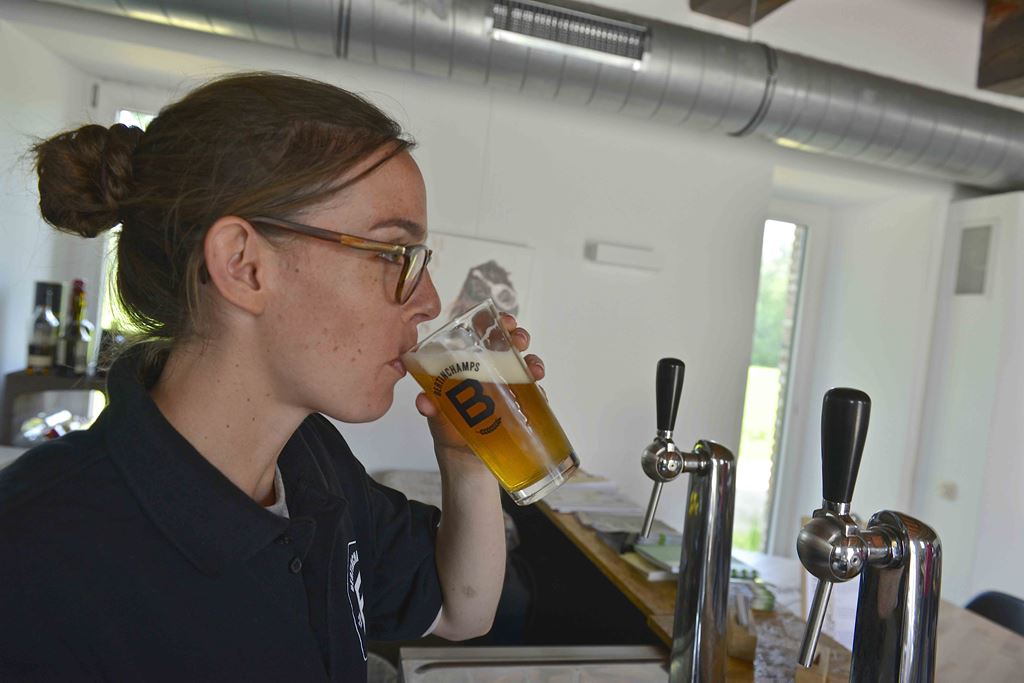 In 2011 brewer Benoît Humblet came across a dilapidated farmhouse, built in the traditional square shape, tucked away in the fields near the small town of Gembloux. Benoît grabbed this opportunity to turn his beer dreams into reality; his entire family getting involved in this lifetime’s project from the word go.

After buying the farm the family’s focus was on a first phase of renovations as they took up permanent residence at Bertinchamps.

In 2013 a modern brewhall with a capacity of 1,000,000 litres was installed in a completely renovated barn.

State-of-the-art technology incorporated into an ancient farm with a history covering over 700 years. The brewery is still gradually taking shape but the traditional character of the classic square farmhouse remains.

At Bertinchamps they are sowing the seeds for a new generation of farm beers.

The letter B on the beer bottle label speaks volumes. It pays homage to: Belgium, Bertinchamps, beer and of course, Benoît the Brewer…

The brewery’s beers are popular locally and are sold throughout Belgium. But they are also shipped to China, Japan, Taiwan, Russia and Australia, amongst other export markets. 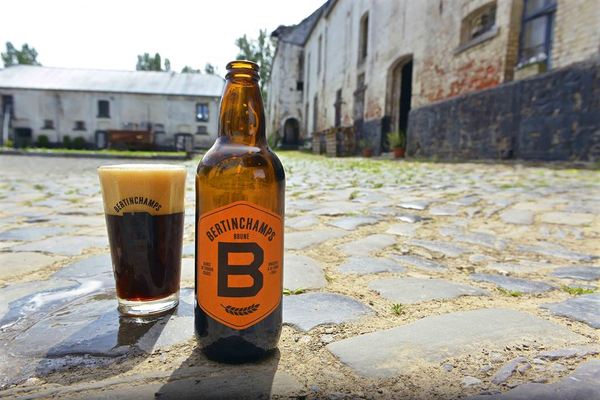 Bertinchamps is producing a new generation of traditional farm beers, brewed with water from a 66-metre deep well, malt and hops. No herbs or other additives are used during the brewing process of the standard range.

The brewery is a member of the Terrabrew association, which promotes “terroir and tradition”, and encourages and helps brewers use local ingredients.

Bertinchamps has made a commitment to only use malt made with locally grown barley. The hops come from central Europe, and one yeast strain is used for all of the beers.

Bertinchamps Brune is halfway between a traditional Belgian stout and a British porter.

Bertinchamps Triple is a full-mouthed beer, light amber in colour. It is cloudy, quite mild, with a lovely bitterness in the finish. Refreshing and with a subtle caramelisation.

The eminently quaffable Bertinchamps Blond is a well-balanced beer, rather dry with a bitter finish.

These beers catch the eye with their unusual, half-litre bottle size. The label is vaguely reminiscent of old school notebooks and vintage bicycle registration plates, with the retro letter ‘B’ always taking centre stage.

The date on the label, 1343, is the year that the Bertinchamps farm joined the Gembloux estates.

There is also a b+ range that includes a blond beer enriched with grapefruit flavours.

This new line was established to produce more experimental beers in lower volumes, and these beers are packaged in smaller, 33cl bottles. 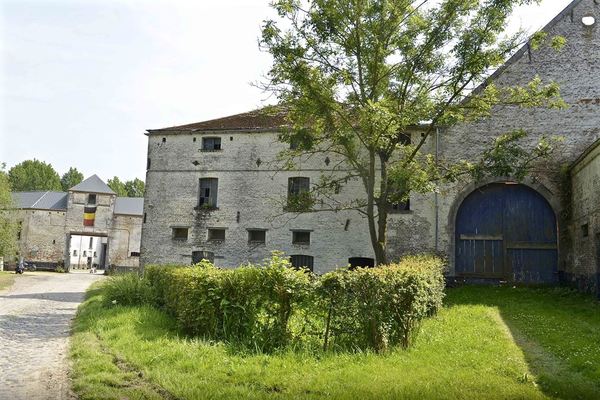 Benoît Humblet is an agricultural engineer with a business management qualification. In Bertinchamps he has found his life’s purpose. With the help of his family he has established a contemporary brewery in an environment steeped in history.

Benoît Humblet can look back on more than 40 years of extensive brewing experience.

In Africa while on his national service, Benoît managed a brewery.

He returned to that continent later years to brew in the former Belgian Congo, the Central African Republic and Cameroon.

There was also a stint brewing for the French Kronenbourg brewery in Strasbourg.

In 1996-1997 he established a brewery on the site of the Abbey of Val-Dieu - a brewery that is still going strong. Benoît switched tracks once again in 2011 when he purchased Bertinchamps.

The brewery is the economic heart of a comprehensive enterprise focused on sustainability, and all of the family are now involved in the business.

Benoît keeps busy brewing while his wife Geneviève provides support wherever it is needed.

Her sister Anne-Claire manages the brewery shop and tasting room. Brother Jean-Philippe is in charge of sales and marketing, whereas Marc-Edouard learning the production ropes, ready to take over from his father, Benoît, in due course. 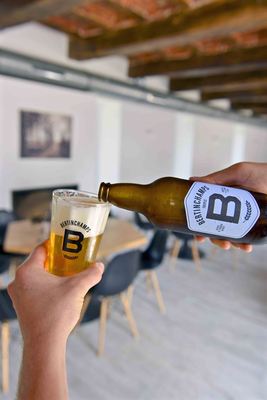 The imposing square farmhouse is built on fertile agricultural land in the Haspengouw region. From outside, nothing mars its idyllic character.

Inside though, the converted barn is home to a brand new brewhall, fermentation tanks, cold storage tanks, a bottling plant and a barrel filling line.

You can visit the brewery by appointment. Taste the beers in the tasting room or on the terrace in the enclosed courtyard.

Here, the past and the present merge seamlessly. The sparse, contemporary house style fits this rustic farmhouse to a tee. Peace and quiet are thrown in free of charge.

There are lots of projects in the pipeline. Guest rooms will be added to the property and a gastronomic pop-up restaurant will eventually have its own permanent space.

The brewery also serves as the engine for an all-encompassing ecological project.

The owners dream of developing a dedicated student beer for the nearby city of Louvain-la-Neuve in tandem with brewing education programmes, and training courses for entrepreneurs. This green oasis has a peaceful atmosphere but positive energy is simply bursting out of the walls. 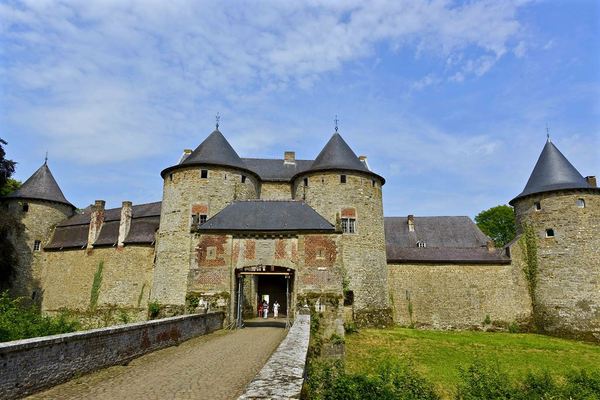 Bertinchamps’ rural location invites you to hike or cycle on your visit. The brewery is easily reached via the Ravel cycling network. Corroy-le-Château, only a few kilometres away, is home to a medieval castle. Its massive silhouette is marked by robust, round defensive towers.

Lovers of art and culture are spoiled for choice in this region.

Dieleman, a Brussels art gallery, moved its operations to Petit-Leez castle, where it displays classical and animal sculptures as well as contemporary African sculpture.

Rural Sombreffe takes its name from a tributary of the River Ligne.

An Ancient Roman army road runs straight through the village. Another highlight is its feudal 13th century castle. Large ancient farmhouses testify to the importance of agriculture for the area. At Floreffe you will find an imposing Norbertine abbey dating back to the 12th century.

The village of Ligny is proud of its Napoleonic past. At Ligny, Napoleon fought the Prussian army in 1815, achieving his final victory two days before the fateful Battle of Waterloo.

The battlefield can still be visited. Memorial plaques at the historic farms of En-Haut and En-Bas remind you of the time spent here by the French Emperor.

The Gembloux abbey barn (1762) is one of the largest in the country. It was recently converted into a modern university lecture hall.

Legend has it that Grouchy, a French marshal, spent the night here on his way to Waterloo. Sent to chase the Prussians, he was delayed and his arrival at Waterloo came too late to save the Emperor in his final battle. 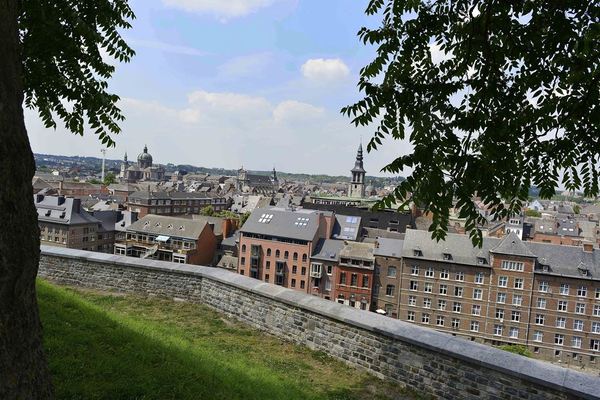 Bertinchamps, near Gembloux, is about 50 kilometres from Brussels by road, a drive of around an hour. From Brussels take the E411 towards Namen-Luxemburg (Namur-Luxembourg), leave at exit 9 (Corroy-le-Grand) on to the N4 towards Gembloux.

The brewery is out in the country, and cannot be reached by public transport.

The city of Namur is half an hour away by car. Enjoy a stroll through the lanes and alleyways that lead to bustling squares or the promenade along the river Sambre.

You’ll find an excellent museum dedicated to graphic artist, painter and illustrator, Félicien Rops, the Groesbeek-De Croix city museum housed in an authentic 18th-century setting, the Museum of Religious Art and the churches of St-Aubin and St-Loup.

The citadel at Namur is the largest in Europe. This imposing bulwark guarded the confluence of the Sambre and Meuse rivers for centuries. Various trails take you through this enormous fortress where you can enjoy splendid panoramic views of the Meuse, the Sambre and Namur’s historic city centre.

We highly recommend taking a boat trip to Dinant. And the most unspoiled parts of the valley of the Meuse are found even further upstream: between Dinant and Givet on the border with France. 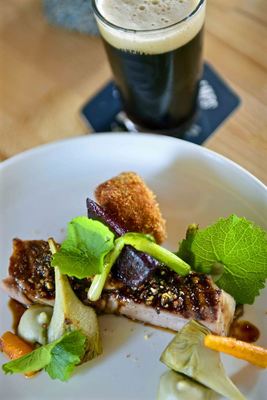 Stefan Jacobs, formerly chef at Va Doux Vent, a Michelin-starred restaurant that has closed, now demonstrates his culinary skills at Bertinchamps on Thursdays, Fridays and Saturdays.

You can expect gastronomic variations on the brewery’s terroir theme, making use of wild herbs freshly picked from the surrounding area. Stefan produces a sourdough bread with the Bertinchamps triple, a granité with the dark beer, malt butter and much more.

The house beers make a great pairing with the dishes, for example a Bertinchamps Blond with a natural syrup of marsh marigold used in a dessert.

This chef follows the seasons and the menu changes regularly to take advantage of seasonal produce.

Snails are a regional delicacy. Mustard and pickles are procured from Bister, a producer of condiments based in Jambes near Namur. When summer is just around the corner, delicious strawberries from Wépion in the Meuse valley feature on the menu.

The Couque de Dinant (a sweet biscuit) is nothing less than a classic. The initiated recommend that you allow this hard biscuit to melt in the mouth.

Cheese lovers find plenty to enjoy in the Molignée valley or along the Méan cheese trail. Sample the Maredsous abbey cheese or the local Molignard. Boulette cheese is a standard ingredient for a flamiche, a hearty savoury cheese flan, typical for the city of Dinant.

The Beginning – Like Chimay and Orval, fellow Ardennes Trappists, Rochefort owes much of its myst...
Read More
GET LATEST BEER NEWS