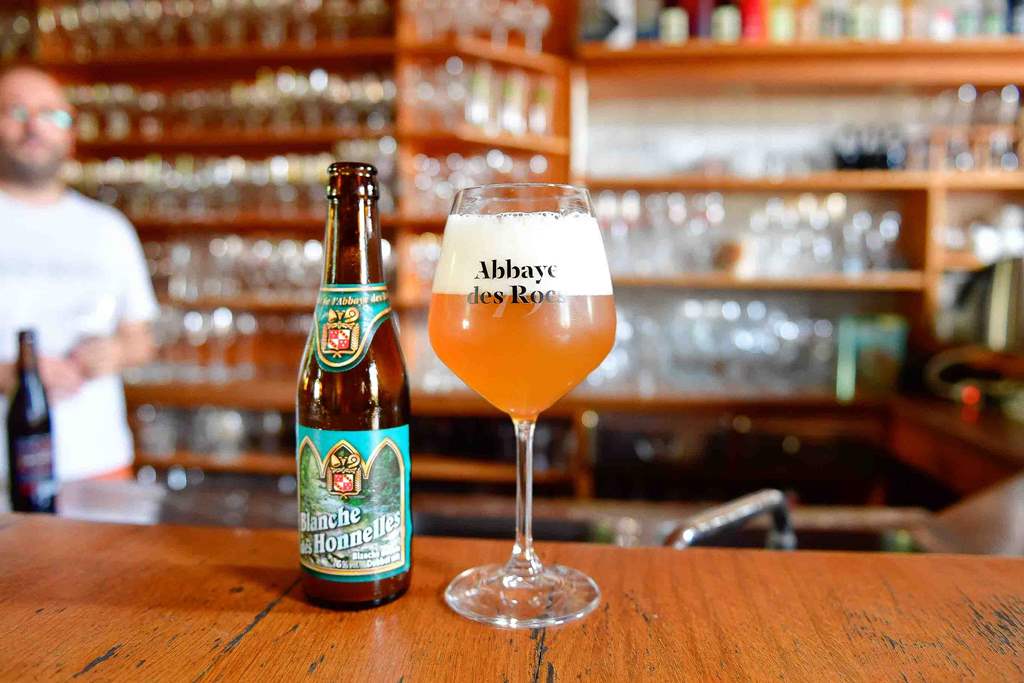 When Jean-Pierre Eloir and his wife, Marie-Jeanne Bertiau, set up the Brasserie de l’Abbaye des Rocs in 1979, they were the first brewers to surf the new wave of microbreweries into Belgium. Their brewery has two years’ start on Dolle Brouwers (1980) and a couple more on Brasserie d’Achouffe, which was founded in 1982.

This new style of brewing was enabled by a change in customs and excise laws that made it possible to produce small volumes of beer of as little as 80 litres per brew. This brewery certainly started off on a small scale, with Jean-Pierre combining brewing with a job at the land registry and Marie-Jeanne worked as an educational speech therapist.

The names of the beers brewed by Abbaye des Rocs, like Montagnarde – a pet name for the inhabitants of Montignies sur Roc – and Blanche de Honnelles, named after the local municipality, all point to the strong local connections of this brewery in an area where terroir and small-scale farming are big deals.

Jean-Pierre learned the brewing trade both from books and from practice. Marie-Jeanne has a background in brewing: her father worked at the (now defunct) Brasserie Cavenaile in Dour, before joining a brewery in France. The birth of Abbaye des Rocs was itself inspired by Double Moine, a beer from Brasserie Cavenaile.

Before long, the part-time-brewing couple were attending trade fairs and beer festivals to increase awareness of their products. The late British beer guru, Michael Jackson, gave the Abbaye des Rocs beers a good rating opening doors in the USA, Canada and Italy.

In 1995 the brewery was handed on to the couple’s daughter, Nathalie Eloir, who still runs it now with her partner, Georges Levecq. Brewing is their main business: Nathalie is a qualified brewer but also has a degree in architectural engineering; Georges has a background in information technology. Science is now an established part of the brewer’s armoury, and the consistency of the beers at Abbaye des Rocs is thanks to regular analysis. 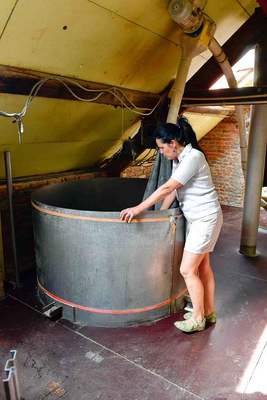 Brasserie de l’Abbaye des Rocs uses brewing water with a low iron content drawn from a well located 47 metres underground. It is the first of the natural ingredients these brewers are so proud of using. They also brew with malt, hop pellets and flowers, coriander, cumin, orange peel, liquorice and ginger. Nothing artificial is added.

It takes real skill to brew interesting beers with herbs and spices. A single strong flavour can easily dominate if you’re not careful, producing a beer that won’t tickle the taste buds for long.

The main fermentation is done with a blend of Chimay and Rochefort yeasts. Dry yeast is used for the in-bottle re-fermentation that all Abbaye des Rocs beers undergo to preserve their taste and to enhance the complexity of the beer.

Abbaye des Rocs itself is a pure malt beer. No sugar is added and this gives the beer its dry-bitter taste. Blanche des Honnelles, a white beer, is brewed with barley, wheat and oats.

Beers made in a natural way are selling well these days. However, consumers still expect their beer to look like a clear, industrially produced beer. Here, that means centrifuging the beers. This brewery is small, but it is not so ‘micro’ as once it was. Extensive cold-storage capacity allows Brasserie de l’Abbaye des Rocs to produce 840,000 litres every year. 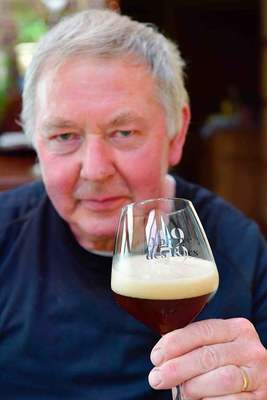 Jean-Pierre and Nathalie Eloir were pioneers of the first generation of microbrewers in southern Belgium. They embrace their local terroir and traditional brewing processes.

Jean-Pierre is self-taught but also packs in a wide-ranging technical background. He first started brewing in his cellar at home. The brewery is now in a separate building, but it’s still right next door.

Nathalie puts her engineering background and brewing diploma to good use. She harbours – realistic – ambitions and makes regular investments, in storage capacity for example.

Nathalie also fosters an interest in historic buildings and ancient monuments. This explains why part of the brewery was constructed using bricks from a nearby abbey farm that had fallen into disrepair.

Nathalie’s own abode is located next to a historic 12th-century water mill at Petite Honnelle.

Her love of nature is evident too. It shines through in the lovely surroundings of the mansion, the flower garden, the vegetable patch, the pond… the site has become a magnet for local artists and exhibitions are hosted from time to time. 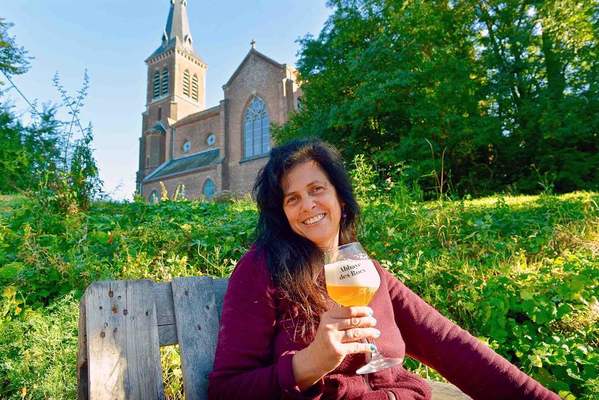 Brasserie de l'Abbaye des Rocs is nestled in a sea of green just a bow’s shot from the French border. The brewery derives its name from a 12th-century former abbey farm in the local area.

The brewery can be visited by appointment and during the tour the brewer will explain the entire brewing process, all the way from selecting the ingredients down to bottling, and re-fermentation in the warm room.

The beers are tasted in a dedicated tasting room next to the old water mill a few kilometres from the brewery where you’ll find a lounge bar and, when the weather is fine, a vintage bar on the covered outdoor terrace. A microbrewery was recently installed in the former stables and is open to groups for brewing sessions.

There is plenty to discover locally. In the large, green market square of Audregnies, the remains of the 18th-century Abbaye de la Trinité can be seen.

Sadly, the original buildings are now gone, replaced with a private home on the site.

This rural corner of Hainaut is well suited to explorations by bike. There are over 700 kilometres of signposted cycle paths criss-crossing a gently rolling landscape of forests, fields and waterways. If you prefer to discover the region on foot, there are several signposted walks of between 5 and 16 kilometres (www.pnhp.be).

Add Maison du Parc Naturel des Hauts Pays in Onnezies, Honnelles to your itinerary to find out everything you need to know about this verdant region. 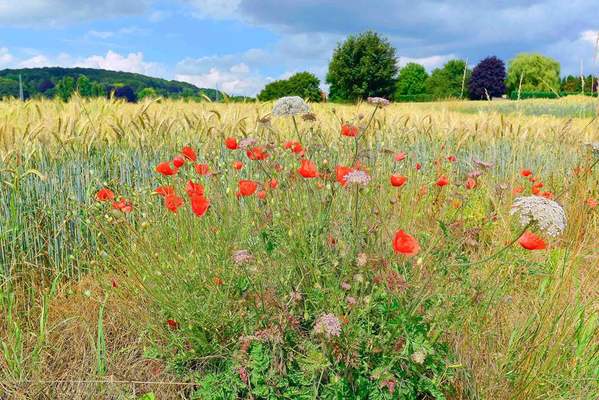 Brasserie de l’Abbaye des Rocs is half-an-hour’s drive from the city of Mons. A visit to this historic city and its surrounding countryside is a perfect combination with a brewery visit.

Although Mons is located in the Borinage, a former mining region, its ancient city centre is unaffected by industrialisation.

It’s a lively place with lots to see. The central market square is engulfed by a sea of outdoor terraces. This is the setting of the annual fight between St George and the Dragon, celebrated in June during the popular festival of Doudou (the Ducasse).

A few paces from the market square you will find the BAM Museum of modern art and the Mundaneum. The latter museum pays homage to Paul Otlet, a visionary who could be seen as a distant precursor of the internet. Otlet harboured the ambition to gather all the knowledge in the world through an ingenious system of index cards.

The Church of St. Waltrude (Sainte Waudru) houses the historic Car d’Or, an ornate golden horse-drawn carriage that carries the relics of St. Waltrude around the centre of the city at the time of the annual Ducasse procession.

The Belfry towers high above the city and affords splendid views across it.

If your taste in art runs towards the contemporary, make your way to the Anciens Abattoirs and the MAC museum.

MAC is located at Le Grand Hornu, a former mining complex on the outskirts of the city. The village of Frameries is home to the PASS science museum, another former mining site finding a new life. 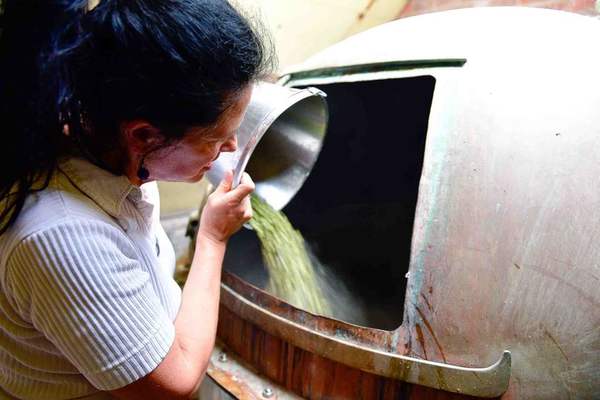 Audregnies is located about 90km from Brussels. By car, the trip will take you one-and-a-half hours. Take the E19 towards Charleroi followed by exit 26 (for Quiévrain).

Travelling on public transport is long-winded and time-consuming. The train brings you to Quiévrain in 90 minutes, from where you can take bus 7 to Audregnies.

Take your bike – or hire locally - to enjoy this green and peaceful area to the full.

The Circuit des Hauts Pays (34 km), a signposted cycle route, explores this varied landscape with its typical villages the perfect places to stop and catch your breath (www.visithainaut.be).

The RAVeL (Réseau à Voies Lentes – slow path network) cycling trails follow discontinued railway tracks and towpaths along canals and rivers. You can cover great distances in this way. The Hainaut part of the RAVeL network extends across 400 km. There is another option for cyclists: the cycling node network.

This has 1,600 km of tracks that connect with partner networks in the north of the country and in France. Use it to cycle to Mons, Tournai or Ath and through nature parks such as the Pays des Collines or the Plaines de l’Escaut. Arm yourself with a map of the cycling node network or just note the nodes that will take you to your destination. 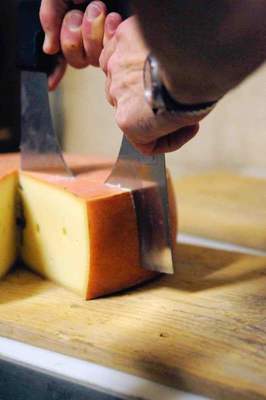 In this corner of the countryside, terroir is where it’s at and small-scale farms predominate on each side of the Belgo-French border. Visit the Natural Park of Parc des Hauts-Pays to find out how people live and work amidst these beautiful surroundings.

We recommend L’Auberge du Passe-Tout-Outre, an ancient inn just a stone’s throw from the brewery, for its regional dishes that often come with a beer on the side. The inn is almost a second home for the brewers who love this renovated 17th-century farmhouse with its splendid gardens and apple orchard.

Regional products you can sample here include goat’s cheese, butter from the farm, honey, and snails as well as Maroilles cheese, a specialty of northern France, and camembert. The butcher’s shop just around the corner uses the beers from Abbaye des Rocs in its patés and andouillette sausages.

Brasserie de l’Abbaye des Rocs brews the house beer for the inn: the dry, blonde Passe-Tout-Outre that is now also sold to quality restaurants. The beer is made with the local hops grown by Luc Lagache, the brother of Laurent Agache who brews at Brasserie de Cazeau. The menu features regional and seasonal dishes such as ‘flamiche with Maroilles’, home-made apple pie with apples from our own orchard, or why not go for ‘White tripe prepared with house beer’?